What is Corrupter Mode?

Starting in release 1.60a, you may now choose Corrupter Mode from the main menu. In this game mode, you play as the monsters and must defeat the humans, which is what normally happens after your transformation in Classic Mode. However, many rules have been changed and you have a bevy of magical tools at your disposal.

Corrupter Mode is still incomplete. Many features do not exist or are horribly balanced.

You may access this menu at any time by clicking the button in the top-left of the screen. 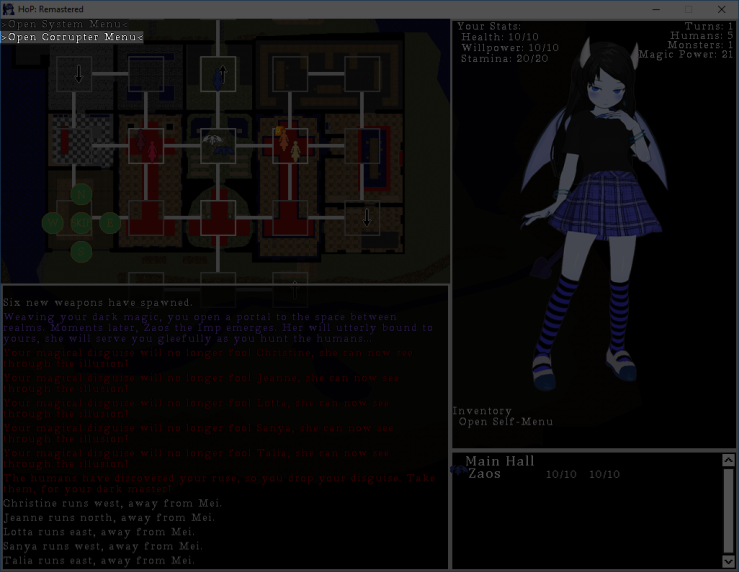 You begin in disguise, in the main hall with the other 5 humans. They do not know you are a monster, and with some effort, you can keep it that way.

At any time, you may drop your disguise from the Self Menu. If all 5 humans discover your true nature, your disguise will drop automatically.

When disguised, humans will not attack you. Instead, they will become suspicious if they see you doing something monster-like. These include things like attacking humans, aiding monsters, or using magic spells. If a human becomes too suspicious, they will identify you as a monster. You will receive notifications when a human is becoming suspicious or when they have seen through your disguise.

Many of your activities will generate noise which propagates through the mansion horizontally (noise does not go up or down stairs). If a human hears a noise, they may decide to come and investigate. If they see you at the source of the noise, they will often become suspicious, so vacate the area if possible or lay a trap for a nosy human. Humans will not always investigate noise, but they will be more likely to as their suspicion increases.

You have a resource called MP, and it is listed along with your HP/WP/Stamina values on your character card. MP is the source of your magic powers and your best tool for converting the interlopers.

Each monster species has different spells, though some spells are shared between all monster species. Experiment to find a play-style that works for each species.

When your disguise has been dropped, you will generate 1 MP per turn automatically. You will not generate any passive MP when disguised, but there are ways to generate some without compromising your cover:

It costs 10 MP to summon a Glyph of Power. These are stationary entities that will passively generate 1MP per turn for you. Humans will become suspicious if they see you create one, and will attempt to destroy one whenever they can.

Glyphs can only be summoned if you are currently at least 2 rooms away from another glyph. If you are in a room adjacent to a glyph, or in the same room as a glyph, your attack damage will increase by 1. This applies to your minions as well.

Destroying Items (Implemented in 1.80a)

You may destroy an item you find in the mansion to immediately receive 2MP. Humans do not think this is suspicious, they cannot see you do it. It is a good idea to destroy spare items you find to prevent humans from using them. You may also destroy a container if you so desire, with the same results.

Channeling (Implemented in 1.80a)

For 3 turns, you may channel MP directly into your body. This produces a total of 10MP if the process is uninterrupted. Humans who see you do this will become suspicious quickly, and the activity generates a lot of noise. You will be unable to defend yourself while channeling, so be careful!

Other Methods (Partially implemented in 1.80a)

Some monster forms can lay traps or have other methods of generating MP, usually by robbing it from unsuspecting humans.

From the Corrupter Menu, you may unlock perks that improve your character and sometimes your minions. Perks cost MP to unlock, and some perks can be unlocked more than once (the effects will stack). Once unlocked, the perk remains unlocked until the game is over, even if you are stunned.

Unlocking a perk does not consume your turn, and humans will not view it as suspicious.

You can right-click a perk to unlock it without showing the confirmation screen.

In Classic Mode, monsters spawn automatically and at set intervals. In Corrupter Mode, you must summon minions yourself at an MP cost. You may summon most of the monster species from the Summon tab in the Corrupter Menu, though some are unavailable (such as Darkslaves and Cows) because they require a human host.

You can mouse over a monster type to check its statistics. Monsters you don’t have the MP to summon will be greyed out. Left-click the monster to attempt to summon it (you will see a confirmation box).

Summoning a monster is extremely suspicious and produces a lot of noise.

Once you have summoned a monster, you may give them orders. To change their orders, highlight them on the Minions tab and left-click them. This will cycle their orders.

You may also use the “Standing Orders” for your minions. Any monster who does not have orders will use the standing orders. This is the “default” and allows you to command many monsters at once. You may change the standing orders by left-clicking the indicator in the bottom-left of the Minions tab.

Monsters with this order will attempt to move to your location and will ignore anything they meet along the way. They will stay with you when possible and will attack any humans who come near.

If not specified, the Standing Orders default to Follow.

When guarding, a monster will stay where it is and attack humans who come near. They will not leave their post unless destroyed.

This is the same basic AI as used in Classic Mode. The monster will roam the mansion looking for humans to attack. If they find one, they will attack them until they are stunned, and then drag them to you for transformation.

Monsters with this instruction will roam the mansion looking for items and deconstruct them, returning MP to you. This can be useful to have you minions help you clean up after transforming a packrat. Your minions will not engage a human unless absolutely necessary, preferring to find more items to destroy.

Transforming Your Victims (Implemented in 1.80a) 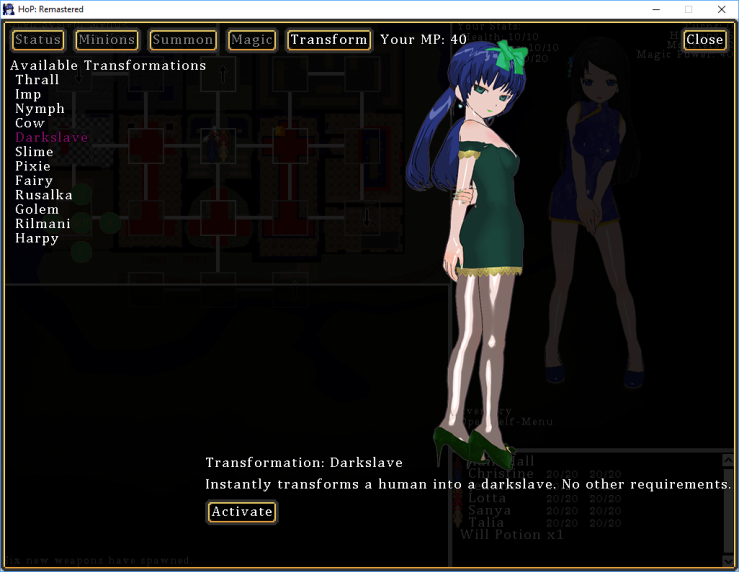 In Corrupter Mode, your minions will not transform a downed human. Instead, they will drag them to you to do the deed. You may choose what form to transform them into from the Corrupter Menu, and the next time you select the Transform command from the context menu, they will turn into that form.

By default, you will turn a human into a Thrall, which has no special powers. You may change your transformation at any time at no cost.